You are here: Home » About » Cotton Warehouse

The Harrison-Raney Cotton Warehouse is one of the two remaining granite and brick Greek revival buildings built along Apalachicola’s Water Street when “Cotton Was King.” 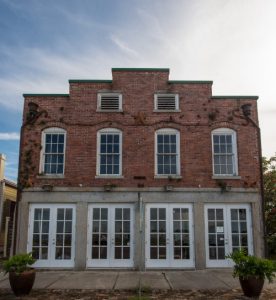 Originally, there were more than fifty three-story buildings, with granite posts and lintels defining the entrances, similar to buildings still found today on Water Street in New York. They continue to be a visual reminder of the close economic and social connection between this once thriving cotton port and the Port of New York.

The end of the cotton era in Apalachicola caused the vacating of the buildings, most of which eventually were destroyed over time by hurricanes, fires and non-use.

Harrison and Raney, who had commercial interests in Apalachicola, built this building in 1836, following the purchase of one of the 30 x 80 foot lots laid out by the Apalachicola Land Company after the Forbes Purchase title settlements. Eventually, an impressive row of wharf-front brick and granite buildings resembling those at the New York City waterfront was built to support the cotton trade that brought prosperity to Apalachicola.

Bales of cotton often filled Water Street. The first floor of the building was used to store bales of compressed cotton received from inland cities for shipment to New York, Boston and to foreign ports, as well as a place to sell other wares. The other two floors supported the business aspects of the Port of Apalachicola’s trade. Over the years, the warehouse was also used as a ships’ chandlery, saloon, hardware store, honey warehouse and for general purpose storage.

The first Keeper for the National Register of Historic Places, William Murtagh, wrote in 1993 that the cotton building presently used as the City Hall, as well as this building, are important because “they are the only remaining skeletons of what started this town.”

Funding from the Florida Communities Trust Preservation 2000 Funds gave the City the opportunity to acquire this 176 year old building from a private party in 2005, and it is currently used as the City’s History, Culture and Art Center.